Which rhymes and chants were traditionally used for casting romance spells?  And does any method guarantee success?  A few clues exits in the rare books of magic and the ‘voluntary’ confessions extracted during various witch trials.

In De Occulta Philosophia the famous magician Agrippa (1486-1535) suggests that potions which include bizarre animal ingredients —  cat brain, wolf penis, and frog bones — are the most effective.   But the everyday spells cast by love-struck maidens were generally more innocuous.

From Mother Bunch’s Closet Newly Broke Open (by T.R.), Joyce Froome quotes the words used for piercing an apple with three pins and placing it under the pillow:

If thou be he that must have me

To be thy wedded bride,

Make no delay but come away

This night to my bedside.

In the years of religious confusion following the Reformation, British Wise Women seem to have sprinkled their spell with a mix of paganism and papist terminology, perhaps believing that their banned Catholic rites still contained magic powers.  Old Chattox (one of the Lancashire Witches) confessed in her trial documents to using charms such as this one ( although this wasn’t actually a love potion):

Three bitter shall be thy Boote,

In worship of five wounds

Yet young girls of that era who wished to dream of their future husbands would say a Pater Noster (Lord’s Prayer) for each pin stuck in their sleeves before going to bed on St. Agnes’ Night, showing that religion and magic were firmly entwined in popular medieval culture.

Or on St. Thomas’ Eve, unwed girls might prick an onion with nine pins while chanting:

Good St. Thomas, do me right,

Send me my true love this night,

In his clothes and his array

Which he weareth every day.

By the early Twentieth Century love spells had become less toxic and more in harmony with the natural world.  Froome explains how The Book of Charms and Ceremonies recommends placing willow catkins in the mouth before saying:

I eat thy luck

I drink thy luck

Give me that luck of thine

Then thou shalt be mine.

Today, however, love potions usually resemble herbal teas.  Here is one example from a “book on Druidic practices”:

This potion should be made on a Friday during the waxing moon, in an earthenware or copper tea kettle.  Before drinking, the lover should recite:

On the following Friday the lover should make more tea and share it with the person they desire who will then fall in love with them!

This brief summary shows a changing trend from the olden days, when young women wished to see who they would wed in harmless dreams, to cunning folk mixing dubious love potions.  During times of religious unrest, ancient prayers and traditional sacred rites were used but these were gradually replaced with herbs, roots, and mystical items from the natural world. 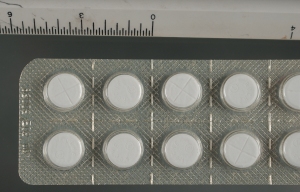 Herbal teas seem harmless enough, but the suggestion to “share it with the person you desire” has become an increasingly sinister idea in this modern pharmaceutical era.  For many years men have used alcohol as a makeshift “love potion” to seduce unworldly women, but since date-rape drugs like rohypnol, ketamine, and gamma-hydroxybutyrate (GHB) are available to those who know where to look, it is increasingly easy to ensure that the object of their desire cannot say no.

Love potions were always designed to make an unknowing or unwilling person comply with someone else’s wishes.  Unfortunately, date-rape drugs have now made it much easier for the predator to succeed!

Froome, Joyce. Wicked Enchantments: A History of the Pendle Witches and Their Magic (Lancaster: Carnegie, 2010)

Potts, Thomas. The Wonderfull Discoverie of Witches in the Countie of Lancaster (London, 1613)