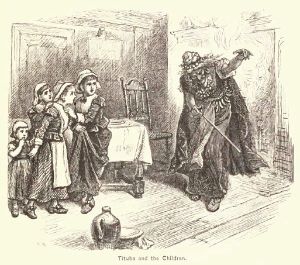 Tituba was the first person examined in the Salem Witch Trials of 1692, and was possibly the only true witch.  She learned the Craft from her mistress in Barbados and likely practiced some form of Voodoo.

Although Tituba was a woman of color there is some debate whether she was African West Indian, Native American, or of mixed heritage.  In the court documents she is listed as an “Indian Woman, Servant.”  She may have been an Arawak Indian from South America who was captured as a child, enslaved in Barbados, and sold to Samuel Parris as a teenager between the ages of 12-17 years old.  Parris brought her to Boston in 1680, along with another slave called John Indian whom she later married.  They had one child called Violet.  During the next few years Parris became a minister,started his own family, and moved his household to Salem in 1689.

What sparked the Salem witch hunts?  Many theories have been offered over the years, but the trigger appears to have been a group of Puritan girls who were bored and yearned for “sport.”  During a particularly harsh winter, when they were often confined to their small houses for long stretches of time, their curiosity was peaked by Tituba’s supernatural tales.  At that time in New England there was also a widespread interest in fortune-telling, which was forbidden.  Two of the girls read fortunes from an egg white in a glass of water, and when they started acting out and having fits  Elizabeth “Betty” Parris and Abigail Williams blamed Tituba as the cause.

The Reverend Parris beat Tituba until she confessed to making a witch cake with Mary Sibley.  And before long, her superstitious ramblings had convinced the people of Salem that Satan was among them. Tituba talked of riding on broomsticks and claimed she saw one of the villagers –  Sarah Osborne – with a winged female demon.  Her accusations led to an outbreak of mass hysteria that ended in the execution of 20 people.

Strangely enough, Tituba was one of the survivors.  Because she had already admitted to being a witch she never went to trail.  Instead, she was placed in jail.  No one knows where she went after her release but it seems likely she was sold to another owner.

Or perhaps the only true witch escaped because she knew a good protection spell!  What do you think?