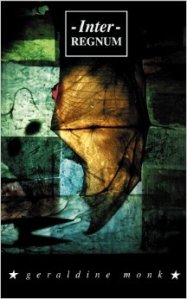 Geraldine Monk’s Interregnum is a collection of experimental poems based on the Lancashire Witch Trials of 1612.  The title refers to a gap or pause in history where the social order shifts.  In this collection, nine-year-old Jennet Device represents such a metamorphosis on several different levels.  She is the downtrodden, exploited child – a female in the lowest patriarchal position – and is closely aligned with the animal kingdom.  But she also becomes an instrument of change.

As the folklorist John Roby shrewdly observed, “Witchcraft and kingcraft both came in with the Stuarts and went out with them.”  Twenty-two years after the first Lancashire Witch Trials, another group of Pendle folk were sent to the assizes, found guilty, but eventually received a royal pardon from Charles 1st who was not as superstitious as his father, King James.  Jennet Device is thought to have been among the accused – “Babyface on the chopping block” (Monk) – but the times were finally changing.

This anthology is strange and penetrating.  It pushes against traditional language, exploring a stark landscape where everything struggles to survive against poverty, prejudice, and oppression.  Resistance is inscribed on the body in scabs and scars.  But there is a freedom in the natural world that can liberate even the weariest spirit.

Monk explores the importance of what happened on the slopes of Pendle Hill – past and present – questioning to what extent history can impact the future.  She ultimately concludes that although we cannot live the lives of others – nor escape “Words birthed.  Made flesh.  Took wing.  Horrids and / enormaties” – we can strive to be less ignorant and more compassionate.

If you like challenging poetry that is felt and processed in gut before being savored in the mind, you will probably enjoy Interregnum.