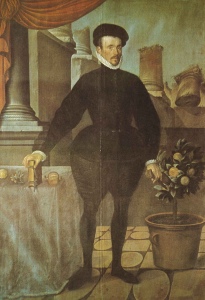 Throughout history, people have consulted doctors to diagnose and treat their ailments, but educated physicians were rare, expensive, and often dangerous. There was no understanding of how germs spread disease.  Indeed, well into the seventeenth century practitioners still followed Galen’s Greek notion that the body was made up of four humors – blood, phlegm, yellow bile, and black bile – and when one of these fluids got out of balance the body fell sick.  Leeches and blood-letting were common practices because fevers were thought to originate from having too much blood in the body. 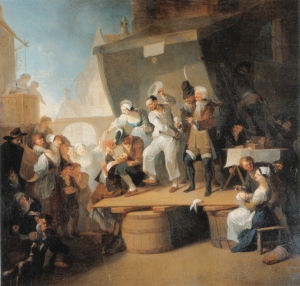 The first barber-surgeons were monks who aided parishioners in their monasteries.  They often advocated a heavy dose of fasting and prayer to accompany their herbal remedies.

Later on, barber-surgeons  were found on battlefields tending the wounded.  In the age before anesthetics, surgery was considered a lowly occupation and these quacks performed many of the procedures that physicians refused to do, including barbaric amputations, teeth-pulling, enemas, and blood-letting for those who could not afford a physician.

If a person knew what was wrong and merely required a cure, they could visit the apothecary.  These were early pharmacists who made medicines, salves, and potions, and also gave out advice on surgery and midwifery.  Their tonics consisted of herbs, minerals, animal parts, urine, honey, and a variety of fats.

If you could not afford any of the above, a cure might be found with a folk-healer.  Cunning men and wise women used magic, prayer, herbal lore, and family experience to tackle the everyday ailments of the townsfolk, villagers, farmers, and their livestock.  They were cheaper than apothecaries and could be paid by trading goods instead of money.  The cunning folk also provided an array of services for specific problems that could be dealt with very discretely – contraceptive powders, abortion, love potions, impotence cures, and poisons.

Some of the more unfortunate – or unpopular – cunning folk got caught up in the witch hunts that swept across Europe throughout that period.  But when people began realizing these healers were not only useful, but necessary, new regulations appeared that differentiated between good magic and bad.  Lighter sentences were handed out – time spent in the pillory or jail – and capital punishment was only awarded to witches – those in league with demons, who conjured up devils or committed murder.

By the end of the Seventeenth Century extensive advancements had been made.  William Harvey discovered how the heart controls blood circulation in the body; Ambroise Pare made important breakthroughs for treating war wounds; Marcello Malpighi invented the microscope; and the first blood transfusions were carried out at the Royal Society in London.  But it took a great many years for these advancements to permeate throughout England.  In the meantime, the common people continued to pray and turn to the wise women for help!