When someone mentions Shakespeare’s witches we naturally assume they are referring to the three weird sisters from Macbeth.  Yet around the same time as the Lancashire Witch Trials were taking place in Northern England, another sinister plot was unraveling closer to King James’ court.  Ironically, it involved a nefarious character who moved in the shadows of Shakespeare’s own circle – a cunning man by the name of Simon Forman (1552-1611). Two years after his death, Forman was implicated in the murder of Sir Thomas Overbury through his relationship with two former female patrons, Countess Frances Howard Carr (1590-1632) and Mistress Anne Turner (1576-1615). 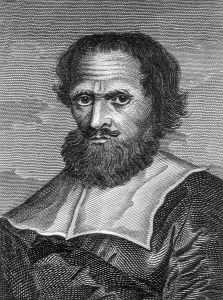 But Simon Forman was neither the fool nor evil magician that Stuart history suggests.  Much more likely he was a self-trained quack whose chief sins concerned the numerous illicit sexual conquests he recorded in his diaries.  Forman was a charismatic, intelligent seducer who dabbled in apothecary, astrology, and the occult arts.  His clients included Emilia Lanier (possibly Shakespeare’s mysterious Dark Lady) and Mrs. Mountjoy, the bard’s landlady.  Interestingly, Macbeth is one of the plays Forman mentions seeing at the Globe Theatre (April 20, 1610).  Yet as Barbara Howard Traister’s biography comments, Forman appeared much more interested in the note-taking doctor than in the supernatural characters, which is intriguing for a man who had already been imprisoned on charges of witchcraft.

Although Forman died in 1611, his reputation and influence lived on.  He was accused of having supplied the poison that killed Overbury in a diabolical plot hatched by the two femme-fatales – Carr and Turner – and of providing the countess with the magical means to be rid her former husband (Robert Devereux) in order to win over the king’s favorite courtier, Robert Carr.

At the center of the controversy stood Countess Frances, a virgin child-bride wedded to the Earl of Essex who had since fallen in love with the dashing Earl of Somerset.  Frances wanted her political marriage annulled so she could marry her beloved, but Carr’s mentor – Sir Thomas Overbury – disapproved of this match and stood in their way.  A plot was hatched to discredit Overbury, and he suddenly found himself confined to the Tower of London on trumped-up charges.

Some years earlier the countess had apparently contacted Simon Forman for a love potion.  It was stated at her trial that the cunning man also supplied her with a range of poisons, that were later mixed with tarts and jellies before being fed to the imprisoned Overbury by his jailor.  He died in September, 1613.  A few weeks later the Devereux marriage was officially annulled leaving Frances free to wed Carr.  But over the following months rumors of the murder plot began circulating at court, finally forcing the king to pay notice and address them.  Under the weight of the overwhelming evidence presented the countess confessed to poisoning her enemy, was found guilty at trial, but eventually received a pardon.  She was released from the Tower in 1622, having served due sentence for her crime.  Her accomplice, however, was not so fortunate. 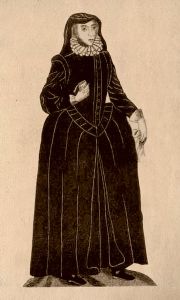 Anne Turner was rumored by some to be the illegitimate child of the conjurer, Simon Forman.  She was widowed from Dr. George Turner in 1610 and then became the mistress of Sir Arthur Mainwaring.  Somehow or other she befriended the countess, perhaps in her capacity as a sought-after dressmaker.  Anne held the patent for the saffron starch that dyed fashionable ruffs and cuffs yellow, a more flattering color for many complexions than the usual ivory white lawn.  She was also an independent business woman who ran houses of ill-repute in Hammersmith and Paternoster Row.  But because she was not of noble birth, the accomplice became the scapegoat for Overbury’s death.  Anne Turner, convicted of being a whore, a bawd, a sorcerer, a witch, a papist, a felon, and a murderer, was hanged at Tyburn in 1615.  She was sent to execution in her own fashionable yellow ruff, by a man wearing the same saffron ruff and cuffs – denouncing the color of her dye and putting an end to that particular fashion.

Of course these were not the three evil ones Shakespeare envisaged when writing Macbeth.  Yet he does add a final statement to the scandal in later versions of All’s Well That Ends Well by having  Parolles mocked for wearing a big ruff starched with “villainous saffron.”

Jacobean witches came in many shapes and guises!