In Act IV – Scene I of Macbeth, Shakespeare’s three “weird sisters” prepare a “hell-broth” to produce a series of apparitions for Macbeth that set in motion a chain of deadly events.  Written only six years before the Lancashire Witch Trials, this script provides a good insight into some of the magical beliefs of that time. 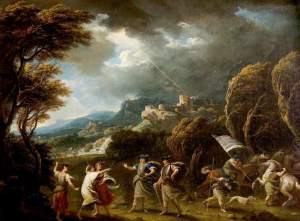 “Round about the cauldron go;

In the poison’d entrails throw.

Toad, that under cold stone

Days and nights hast thirty one

Boil thou first i’ the charmed pot.

Fillet of a fenny snake,

In the cauldron boil and bake;

Eye of newt, and toe of frog,

Wool of bat, and tongue of dog,

For a charm of powerful trouble,

Scale of dragon, tooth of wolf,

Root of hemlock digg’d i’ the dark,

Gall of goat, and slips of yew

Sliver’d in the moon’s eclipse,

Nose of Turk, and Tartar’s lips,

Make the gruel thick and slab:

For the ingredients of our cauldron.

Cool it with a baboon’s blood,

Then the charm is firm and good.”

The Jacobean audience believed that witches brewed such diabolical charms, and seeing this dramatic scene live on stage they would likely have been terrified, fascinated, mesmerized, and revolted by the disgusting ingredients – exactly as Shakespeare intended.  But let us take a closer look at his recipe.

The bard was not only a master playwright, he was also a shrewd psychologist who understood the minds of the masses who flocked to the London theatres. Therefore, it is not surprising that one of the first things thrown in the pot is the fenny snake, a nod to the snake who tempted Eve in the Garden of Eden.  The Catholic Church claimed that all women were necessarily evil because of Eve’s transgression, and that explains why the majority of accused witches were female.  The next three ingredients – eye of newt, toe of frog, and wool of bat – are added to the first item swelter’d toad venom – highlighting four nocturnal creatures that are often associated with witches and their familiar spirits.  The liver of blaspheming Jew endorses the common anti-Semitic beliefs of that era, alongside the racial prejudices held against the Turk and Tartar.  And Shakespeare further played into the beliefs of his class-conscious, biased audience by having a good man like Macbeth brought down by his scheming wife and a band of wicked hags.

Why did Shakespeare choose these fierce-sounding ingredients?  Joyce Froome (Wicked Enchantments) argues that, for the wise women of Pendle, these herbs would be part of their everyday folk magic.  Catt Foy (Witches & Pagans) suggests that maybe “Shakespeare knew a little more about herbcraft than he was letting on,” and Nigel Beale (Literary Tourists Blog) believes he chose names “designed to gross out the masses, to stop them from practicing magic.”

But William Shakespeare was  also a poet.  He knew the magic of words and  rhythmical power of his hypnotic witch chant.  It did not matter that these characters may have been throwing armfuls of common hedgerow roots and leaves into a boiling cook pot.  Much more important were the awful-sounding names that conjured up terrifying images in the minds of his audience – and at this he was an unsurpassed wizard! 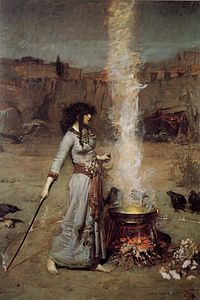 Beale, Nigel. “Macbeth and what was in the Witches Brew” (Literary Tourist) http://literarytourist.com/2009/10/macbeth-and-what-was-in-the-witches-brew/ accessed 2/2/2015

Froome, Joyce. Wicked Enchantments: A History of the Pendle Witches and their Magic (Lancaster: Carnegie Books, 2010)