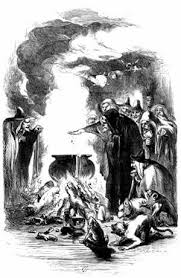 From my voluntarie Confession and Examination (April 2, 1612)

” . . . the speediest way to take a mans life away by Witchcraft, is to make a Picture of Clay, like unto the shape of the person whom they meane to kill,& dry it thorowly: and when they would have them to be ill in any one place more then the other; then take a Thorne or Pinne, and pricke it in that part of the Picture you would so have to be ill: and when you would have any part of the Body to consume away, then take that part of the Picture, and burne it. And when you would have the whole body to consume away, then take the remnant of the sayd Picture, and burne it: and so thereupon by that meanes, the body shall die.” 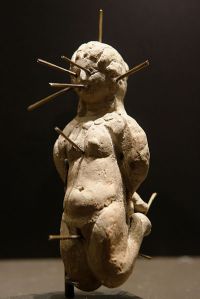 Source: Potts, Thomas. The Wonderfull Discoverie of Witches in the Countie of Lancaster, 1613.

A Charme to Cure the Bewitched. 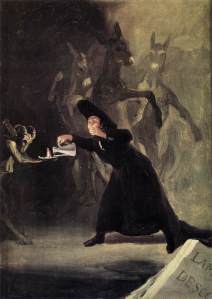 “Upon Good-Friday, I will fast while I may
Untill I heare them knell
Our Lords owne Bell,
Lord in his messe
With his twelve Apostles good,
What hath he in his hand
Ligh in leath wand:
What hath he in his other hand?
Heavens doore key,
Open, open Heaven doore keyes,
Steck, steck hell doore.
Let Crizum child
Goe to it Mother mild,
What is yonder that casts a light so farrandly,
Mine owne deare Sonne that’s naild to the Tree.
He is naild sore by the heart and hand,
And holy barne Panne,
Well is that man
That Fryday spell can,
His childe to learne;
A Crosse of Blew, and another of Red,
As good Lord was to the Roode.
Gabriel laid him downe to sleepe
Upon the ground of holy weepe:
Good Lord came walking by,
Slep’st thou, wak’st thou Gabriel,
No Lord I am sted with sticke abd stake,
That I can neither sleepe nor wake:
Rise up Gabriel and goe with me,
The stick nor the stake shall never deere thee.
Sweete Jesus our Lord, Amen.”

Taken from Jennet Device’s testimony against her bother, James (August, 1612)

Aside from the infamous Pendle Witches who were put on trial in 1612 and 1634, there were other unfortunate victims maligned and persecuted throughout Lancashire.  Many of their names were never recorded.  Some were accused and later released – some went to court and were found Not Guilty – and some were undoubtedly dealt with by the locals in their own ways.

In these unenlightened times it was common for women denounced as witches, shrews, and gossips to be locked inside a scold’s bridle – a metal brank that caged the head and prevented eating or speech. 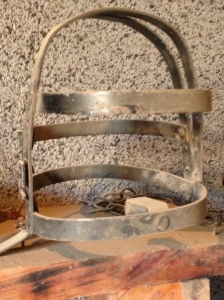 Public floggings and placement in the stocks were also regular market-day events.  And tales of dunking suspected witches in near-by ponds and rivers to see if they were guilty (and floated) or innocent (and drowned) are part of local folklore.  So it is quite surprising that one other name still fills the local schoolchildren with terror – Meg Shelton, The Fylde Hag.

Born Margery Hilton, Meg (or Mag) Shelton is said to have lived at various times in Cuckoo Hall near Wesham, Singleton, Catforth, and Woodplumpton.  She was a poor beggar woman who survived mainly on a haggis made from boiled grouts and herbs.  Meg is infamous for her shape-shifting skills, and apparently could turn into a variety of animals and all sorts of inanimate objects at will.  One tale records her creeping into a barnyard at night to steal corn.  When the farmer ran out after her there was no one in sight, though he did notice an extra sack of corn.  So taking his pitchfork he prodded each bag, finally uncovering Meg’s disguise when she squealed and reappeared nursing a bleeding arm!  Another of her injuries was explained by an accident trying to outrun a black dog when she was disguised as a hare.  The dog nipped the hare’s hind leg – and Meg was said to walk with a limp thereafter.  Meg was often seen riding her broomstick at night.  She could turn milk sour, lame cattle, and  curse hogs.

But the reason folk remember the Fylde Hag today is because of the strange events surrounding her death.  She was killed in 1705, crushed between a barrel and the wall of her cottage.  She was buried on May 2nd, at night, by torchlight, in the grounds of St. Anne’s Church in Woodplumpton.  The following morning her hand had clawed its way to the surface and had to be reburied.  The same thing happened again and everyone was naturally terrified.  A priest came and performed an exorcism.  Then someone suggested they rebury her upside down so she would dig her way to Hell, instead of to the surface.  So they planted her head-first in a narrow trough, and then put a huge granite boulder on top to keep her in place.

In hindsight it seems odd that a known witch would be put to rest on consecrated ground.  Usually they were buried at a crossroad with no signposts so they could not find their way home.  Or their bodies were burned.  And it is entirely possible that the granite stone in  St. Anne’s graveyard is a harmless relic carried down by the ice age.  But superstition is often stronger than common sense – and we all like to believe in a little magic.

Over the centuries, the legend of Meg Shelton has survived and flourished.  I grew up being told that if you walked three times round her grave chanting, I don’t believe in witches, then that hand would rise up from the grave and grab your ankle.  But I cannot say if that actually happens or not as I never dared try! 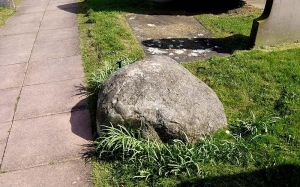 The Divine Comedy is an epic poem written by Dante Alighieri between 1308-1320 AD.  As one of the most influential books ever composed, this religious allegory about the importance of salvation marks the start of Italian literature.

Written in the first person, Dante imagines his soul’s spiritual quest as it ventures from darkness into light. 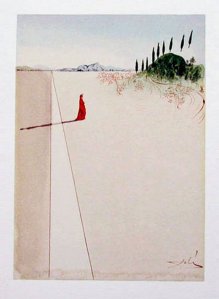 “Midway on our life’s journey, I found myself

The narrator wakes up one day to find himself in the dark forest of sin.  The spirit of Virgil appears and promises to lead him on the path of salvation through Hell, Purgatory, and into  Heaven.  Virgil eventually hands him over to Beatrice (the ideal woman).

Dante’s world is full of monsters and demons.  Each soul is punished according to its former deeds, which range from small self-indulgent transgressions such as a lack of willpower. to violent and malicious crimes.  Hell is portrayed as an underground funnel made up of circles.  At the bottom sits Satan who perpetually gnaws on history’s three worst traitors: Judas, Brutus, and Cassius.  The punishments inflicted on the travelers are vivid and relentless – the stuff of eternal nightmares.  Yet those sinners who have confessed to their crimes before death are eventually permitted to leave Hell and head through Purgatory in search of Heaven.

Purgatory is a mountain made up of 7 rings, with the Garden of Eden at the top.  Once cleansed of their sins, the wandering souls rise up toward Heaven where God appears as a vision of light.

Dante’s morality poem is a tale of justice and retribution.  The wrong-doers are punished for their past crimes with the worst torments imaginable.  They have to suffer alone and abandoned, devoid of help or hope. 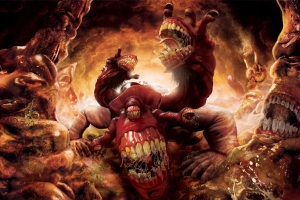 So why is this classic called The Divine Comedy when it is a full-blown scary vision of Hell?  Because Dante’s epic has a happy ending and therefore is not considered a tragedy in the standard literary tradition. 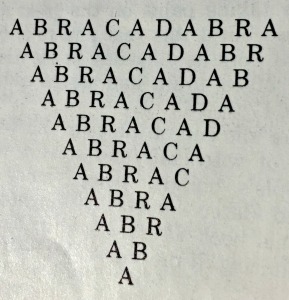 Home Guides. “How Toxic Is Oleander To Humans?” at http://homeguides.sfgate.com/toxic-oleander-humans-82304.html

Medline Plus.  “Oleander Poisoning,” at https://www.nlm.nih.gov/medlineplus/ency/article/002884.htm 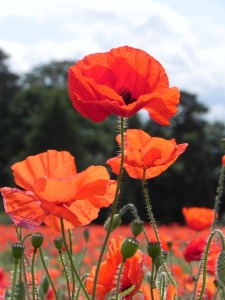 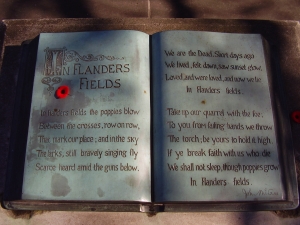