There are few place in England older, or more shrouded in mystery, than Stonehenge.  The famous stones in Wiltshire have aroused much speculation throughout the centuries – that they were built by alien gods – conjured up by Merlin – designed by the Druids for ritual sacrifices – or were part of a mystical system of Ley Lines.  This magic circle still draws thousands of tourists every year from all parts of the globe.  It is a place of natural energy and stunning design.

But there is another place of wonder in the North of Britain, far more ancient and equally fascinating, called Pendle Hill.  Almost the size of a mountain, it rises 1,829′ above sea level in the Pennine Range, separating the ancient seats of Lancaster (Lancashire) and York (Yorkshire).

The hill is a place of stark, feral beautiful, often mysteriously shrouded in mist.  A Bronze Age burial site has been discovered on the summit, and it is said that the Druids once lived close by.  For as long as men and women worshipped the rising sun there have been celebrations on this thirsty earth, a soil demanding human blood.  There are rumors of wicker-man sacrifices – fertility rites to bring in the spring – priestesses who could raise storms and conquer invading enemies.  Even the great Julius Caesar admitting to fearing these weird conjurers.

Although little of Pendle’s history is certain before the Norman Conquest, the land was then given to the De Laceys and they established two “royal” hunting grounds, one in the Forest of Pendle and the other in the Forest of Trawden.  Throughout the Middle Ages  this area was a center for sheep farming and wool production, and despite Henry VIII’s Reformation the people clung to their old beliefs – probably a little Celtic paganism mixed with Catholic ritual and a hefty dose of superstition.

It is still an awesome place today.  From the top of the cairn you can often see as far as the sea.  The air tingles with a hidden current, like the pulse of an ancient heartbeat.  This peculiar energy cannot be explained but it has been interpreted in two important, yet widely opposing ways.  In 1652 George Fox climbed to the top of Pendle Hill and had a vision of many souls coming to Christ. This compelled him to start the Quaker Movement and dedicate his life to the service of God.

A few years earlier, however, this same land was thought to be riddled with witches and demons, which triggered the Lancashire Witch Trials of 1612 and 1634.

If you are ever in Lancashire, it is well worth a visit!

It is impossible to know what really happened before and during the Pendle Witch Trials of 1612.  The only extant document is the blatantly biased trial record, written by a clerk called Thomas Potts to gain favor with King James 1st.  Mary Sharratt, however, makes an excellent attempt at fleshing out a plausible tale around the two central characters — a local cunning woman known as Mother Demdike (Bess Southerns), and her pretty teenage granddaughter (Alizon Device).  Sharratt’s cunning folk are Catholic herbalists and fortune-tellers, doing whatever they must to survive in remote, harsh Lancashire.

Daughters of the Witching Hill (Mariner Books, 2011) is more a historical fiction than a thriller.  It offers a sympathetic portrayal of marginalized females battling against the patriarchy.  Sharratt has a good grasp of the local superstitions, traditions, religious conflict, and public ignorance of the period, and the Demdike clan emerge as a group of strong women, bonded by circumstance and sustained with love.  Most interesting is Sharratt’s invented seventeenth-century Lancashire dialect: “I bide with my daughter, Liza of the squint-eye, and with my granddaughter, Alizon . . . .”

As is necessary in any saga as complex as the Lancashire Witches, Sharratt takes some “fictional liberties” by combining several real people into one composite character, and changing some of the repetitive historical names for the sake of clarity.  She also suggests that Demdike taught another rival cunning woman her craft (Mother Chattox); that Mistress Alice Nutter was a secret practicing Catholic; and that Justice Roger Nowell derived some personal (perhaps sexual) satisfaction from his dealing with the so-called witches.  These are all credible assumptions.

Less likely, is her portrayal of Demdike’s daughter Elizabeth Device (known locally as “Squinting Lizzie”).  In Daughters of the Witching Hill Lizzie has no interest in her mother’s magic.  She appears as a chaste lonely widow who follows the new religion because she is infatuated with a Church Warden called Richard Baldwin.  He impregnates her with a third child, Jennet Device.  Yet while this provides a romantic interlude in the harrowing proceedings, I strongly suspect the Demdike home was called Malkin Tower because malkin meant “sluttish woman” (OED) and  Squinting Lizzie may well have been one of the local prostitutes.

Sharratt, however, has every right to fill in the gaps of this ambiguous story with her own interpretation, and her sympathetic version of events certainly makes an intriguing read.  A highly-recommended novel.

The traditions of the Goddess are handed down from mother to daughter.

The Familiars is in many ways a modern gothic romance set against the backdrop of the Lancashire witch trials. It tells of seventeen-year-old Fleetwood Shuttleworth’s plight to provide an heir for Gawthorpe Hall after three unsuccessful pregnancies. She enlists the help of a mysterious local wise woman – Alice Grey – who later becomes one of the accused victims. After a string of dangerous adventures, however, things reach a satisfactory conclusion.

Unlike other recent books on the Pendle Witches, Stacey Halls chooses a minor, overlooked historical character as her focal point. Alice Grey is a midwife who may or may not be associated with a familiar in the guise of a red fox, though any magic we see her perform is practical herbalism rather than supernatural spell-casting. Yet we experience Alice through the eyes of Fleetwood Shuttleworth, a privileged narrator far removed from the violence and poverty of the accused witches, who only rushes to help the midwife for personal gain. Halls’ description of the Well Tower in Lancaster Castle is the closet we get to understanding the harrowing ordeal that these real prisoners went through. But having read some of the early reviews, such sanitizing of historical unpleasantness may be necessary for the modern squeamish reader.

The Familiars is an enjoyable story based on the few facts known about the events of 1612. I particularly liked the thoughtful observation that bearbaiting in London was popular because the bloodthirsty townsfolk did not get a chance to hunt!

Halls’ historical research is sound, the setting well-crafted, and the characters consistent with the gothic romance genre. This novel will appeal to readers who want to taste what living through a witch hunt may have been like, but without any graphic information.

Newchurch-in-Pendle is an ancient village in the North of England, close to where several of the Lancashire Witches once lived and roamed.  It has been a religious center since Druid days, with the first Christian building appearing around 1250.  In 1544, a stone chapel was dedicated by the Bishop of Chester, possibly with the original tower.  Then a gallery was added in 1915, though the current St. Mary’s Church that stands here today has been restored and renovated many times since throughout the centuries.

The most fascinating feature is the carving on the west face of the tower (under the clock face) – a large eye said to symbolize the all-seeing Eye of God.  In earlier years though, this may have been a talisman to ward off evil from the local cunning folk who were forced by law to attend services here every Sunday.  Today, St. Mary’s is also one of the few remaining churches that still celebrates the medieval Rushbearing Festival with a special service each August. 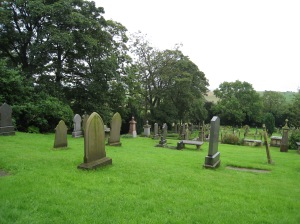 The graveyard contains the headstones of many old families.  The Nutter plot (dated 1694) likely contains the  descendants of Alice Nutter, one of the witches executed in 1612.  From this consecrated soil, another witch – Old Chattox – supposedly stole twelve teeth that she later traded with her rival, Old Demdike.

In later times the village funeral processions were led by two black horses, and when these were spotted coming over Nanny Maud Hill the church bells began tolling The Passing Bell.

The Bone Room opens onto the graveyard, and for many years served as the Charnel House – a place where human remains were stored.  These were skeleton parts that had either been dug up by accident, or intentionally removed to make room in a plot for fresh bodies.

St. Mary’s Church is one of two major landmarks to have outlived the old belief in magic.  The other – providing its majestic backdrop – is the famous Pendle Hill.

Clayton, John A.  A History of Pendle Forest and the Pendle Witch Trials (Lancashire: Barrowford Press, 2007)